Taking a Left into a Driveway 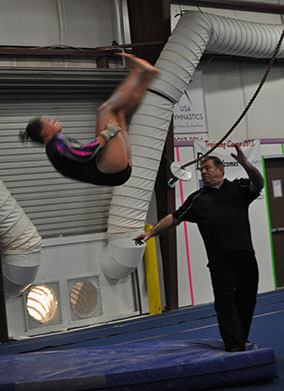 As we are fast on our Road to Rio and Olympic Trials, I wanted to take a moment to write about our own Olympic treasure, Dr. Vladimir Zaglada, or Coach Vlad as he is affectionately referred to.

The story of how we met Coach Vlad is worth sharing.  He literally drove up the driveway of the gym we used to be at one Saturday afternoon.  I remember him walking in and straight to a coach.  I thought he was a gymnast’s grandfather.  Not long after, he started appearing at the gym – helping team and creating a buzz.  I remember being told to check out his credentials and he is someone we should hang on to.  So, I did – on both!

My daughters became fond of him and I remember telling him that Donna Kaye wanted to coach and someday have her own gym.  His mind immediately went to work.  He pulled me aside one night and said,

“You need to find a building.  I have friends that have a rhythmic gymnastics team and they need a home too.  We’ll start out small…”

The rest, as they say, is history and BIO Gymnastics will be celebrating its 3rd birthday on April 1st.  As we talk history, here are some facts about our beloved Coach Vlad:

I am still, to this day, in awe that we have Coach Vlad as part of our team, not only instructing our gymnasts, but our gymnastics coaches as well.  He has a solid vision for our coaches and the program.  I am proud that he wants BIO to be a part of the enormous legacy he has in the sport of gymnastics throughout the world.  Share this story with your children.  It truly is a privilege to be taught by this man.

To think this all started with turning into a driveway….

BIO Gymnastics - Where champions are made in and out of the gym. 1180 Samples Industrial Dr.

Thank You for Being Part of the BIO Family - https://mailchi.mp/d86b5f7c4faf/thank-you-for-being-part-of-the-bio-family